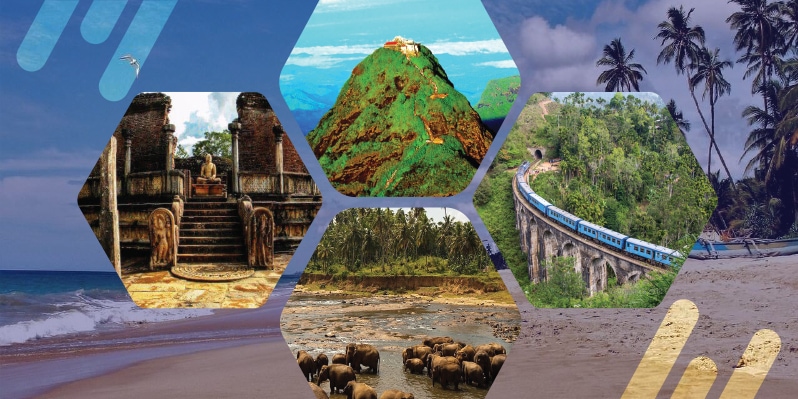 Situated right below India is the island nation of Sri Lanka. Known as the pearl of the Indian Ocean, Sri Lanka is a tourist magnet. Blessed with diverse natural scenery, one of Sri Lanka’s biggest sources of revenue stems from its tourism industry. In fact, the country’s tourism sector comes in third for their foreign exchange-earners. In 2018 alone, tourism brought $4.3 billion to Sri Lanka that came from 2.3 million visitors. It is the result of the nation that comprises some of the most attractive places that you need to visit at least once while in Sri Lanka.

However, tourism took a grievous fall in April 2019. This is because of the racially fueled terror attacks that occurred just a month short of the ten-year anniversary of peace for the country. As a result, tourism decreased rapidly in the following months. However, as of August 2019, tourism has started to pick up again and the country is predicted to reach its previous peak in the early months of 2020. As of now, the country has been declared safe for all tourists again.

If you’re a first-time visitor to Sri Lanka, you may be intimidated by the range of choices you have. As mentioned before Sri Lanka has a highly diverse scenery. Despite its small size, each province of Sri Lanka has something very different to offer. The country is divided into 9 provinces that can be loosely said to have a different tourist attraction apiece. Moreover, as Sri Lanka does not have a uniform terrain, there is also a climatic difference in each province. For example, the central province of the country has a high altitude, leading to a much colder temperature in contrast to the coastal areas of Galle in the southern province.

Thus, when it comes to attractive places in Sr Lanka, below are eight highly rated tourist spots:

Located in the central province of Sri Lanka, Nuwara Eliya is a city nestled atop the hilly areas of Sri Lanka. Known for its continued legacy of being a primary source of tea plantations. Being in the center of Sri Lanka, this city is much chillier than Sri Lanka’s other cities. In addition to the tea plantations, Nuwara Eliya is also home to Galway’s Land National Park. Which hosts a variety of bird species. As a hill station for the British in the 19th century, much of the city’s architecture remains Victorian.

Hambantota is a town in the district of Hambantota in the southern province of Sri Lanka. Full of sprawling golf courses, Hambantota is also known for its spots of Buddhist cultural heritage.

As the south Asian elephant numbers slowly pick up, orphaned and elderly elephants are nursed in the Pinnawala Elephant Orphanage. Located in the Sabaragamuwa province of Sri Lanka, this location is essentially an open area. Thus, visitors can observe elephants in their natural habitat as they go about their day. Visitors can also make donations to the orphanage for the sustained welfare of the elephants.

An ancient rock fortress with a bloody history, Sigiriya is located in the central province of Sri Lanka. It was incredibly well-preserved fresco paintings from the ancient days of Sri Lanka. This rock fortress is also colloquially dubbed the “eighth wonder of the world”. And is now a UNESCO world heritage site. Originally, this fortress was said to have been built by King Kashypa in an effort to hide from his brother’s army after the former brutally murdered their father.

Adam’s Peak is a mountain in Sri Lanka that is known for hosting the Sri Pada. Translated to the Sacred Footprint in English, this mountain plays a huge role in Buddhist culture. This is because the Sri Pada is said to have been the footprint of the Lord Buddha himself.

Colombo is the commercial capital of Sri Lanka and is such the fastest-paced city of the country.

The capital city of the north-central province, Anuradhapura contains the ruins of an ancient Sinhalese kingdom. The city also has a rich cultural history of being an ancient capital of the country.

Nestled in the city of Galle in the southwestern province, Galle Fort was built by the Portuguese. Known for overlooking blue beaches, Galle Fort is still immaculately preserved in the same style as it was built. You need to know about company registration fees in Sri Lanka. In fact, the whole city of Galle has remained in style with its Dutch architecture.

If you are a travel enthusiast, you can also choose Thailand as your next travel destination. To know more about Thai tourism, read Tourism in Thailand -guideline for the foreigners.