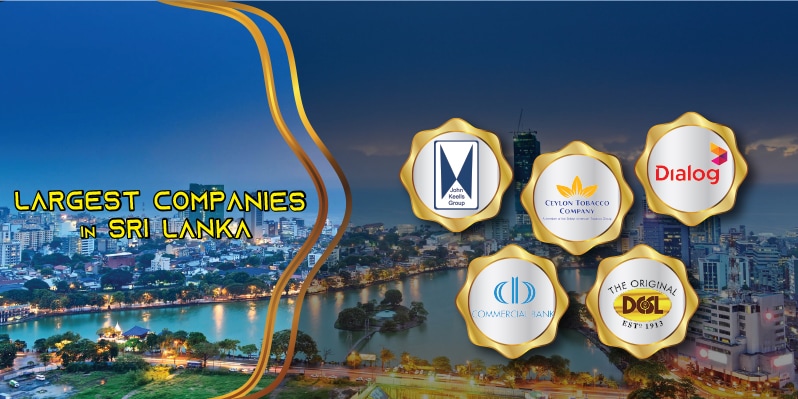 Sri Lanka has gone through many hurdles like the civil war, Tsunami, etc. Yet, as a nation it keeps growing stronger and more vibrant than ever. The country focuses much on how to further develop businesses. The state provides necessary resource for entrepreneurs making it easier to enter into business field. This influenced to promote several large companies in Sri Lanka, and the number of big companies are still growing in this nation.

A company that makes large profits and consists a large number of employees defines as a large company. How these companies came into growing into top businesses is by creating a brand. It may take time and commitment to creating brand value. But you will reap your harvest in no time. Brand value is what makes the consumer want to pay more for your product or service. Good quality, good consumer care, brand awareness, brand owners’ image are the factors to concentrate on.

Companies that have managed to go through the mill come out shining, ends up as the Large companies in Sri Lanka.

When you take some of the top companies in Sri Lanka you will see that they date back all the to the British ruling era. Have you ever wondered about how these giants managed to sustain their brand all these years? It is worth investigating.

Following are the Top 5 Companies which earned there ranks according to their Market Capitalization. (All data is extracted from the Colombo Stock Exchange (cse) website 2019.)

With a whopping market capitalization of LKR.211,698,628,607.40 JKH is the only conglomerate which hold a AAA for brand value. That is the highest grading for brand value. Going back to history of the Company it was established in 1870 by two English businessmen named, Edwin & George John. In time it merged with two other broking firms in London. Then it acquired a local broking firm called keel & Waldock Ltd. During the mid-seventies the firm acquired Walkers tours and travels along with Mackinnon’s Group. The acquisitions paved to way to John Keels Limited. The firm went public in 1974.  Twelve years later, John Keels Holdings came into existence.

Listed second on the CSE, with a Market Capitalization of 209,802,601,120.00 (7.98%) is the Ceylon Tobacco Company. It was established in 1932 & involves in manufacturing and marketing Cigarettes. The company makes its sales in the domestic & global markets. Gold Leaf, Benson & Hedges, John player, Bristol, Capstan, Dunhill are the brands that the Company sells locally.

The company is a mobile telecommunications network. It provides mobile, fixed, broadband services. It was incorporated in 1993 as MTN (Pvt) Ltd as a partnership between Telekom Malaysia Berhad & Capital Maharaja. Dialog was the first company to introduce GSM. Its rival Celltel ran on analog technology. It didn’t take long for dialog to crush its’ competitor and become no.1 in the Market. The CEO is Dr. Hans Wijayasuriya. Dialog was the first “Quadruple Play” telecom service provider. Its investment to the country since the inception comes to a total of USD.2 billion.

CBC was formed in Sri Lanka in 1920. A British overseas bank named Eastern bank opened a branch in Sri Lanka. Chartered Bank, another British Bank acquired Eastern Bank and ran it separately. In 1961 the Government of Ceylon forbade citizens to not make deposits in foreign banks. In response, the Eastern Bank incorporated its branch with an equity of 40% and changed the name to Commercial Bank of Ceylon. In 2004 CBC established branches in Dhaka & Chittagong to become the first sri Lankan bank to move to foreign countries.

The distilleries company of Sri Lanka was established in 1917. It is involved in distilling, manufacturing and distributing liquor products. The company brands are Karemer Brut, Adipisicing elit sed, Tavel Rose, Pouilly Fuisse, Nappolean, Extra special Arrack and varieties of coconut arrack. In 1974 the State Distilleries Corporation took over the Company. In 1992 the company was privatized.

In 1995 the company in a Joint Venture started business with Pernod Ricard of France. He was one of the top five liquor Producers in the world. He produced whiskeys, brandies and other international liquor in the country for the domestic market. At present, the Company represents world renowned brands such as Chivas Regal and Jameson Irish Whiskey.

Since 1999, the company made the following acquisitions. Aitken Spence PLC & Sri Lanka Insurance Corporation Limited (Owned by the government at the time). Well, now you need to know about tips of company registration Sri Lanka.

Apart from the corporate giants mentioned above, these are some other large companies in Sri Lanka for 2019.