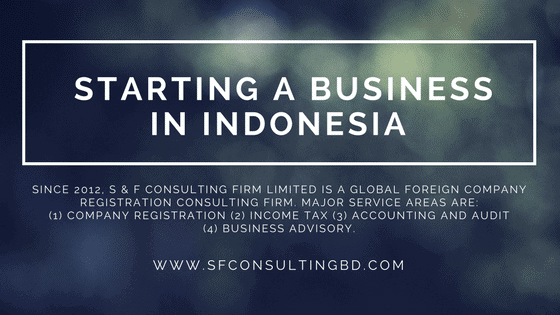 We have discussed advantages and disadvantages of starting a business in Indonesia for foreign investors. As it stands, Indonesia has the largest economy in the entire Southeast Asian region. Its multi-cultured mix of people along with an eager government has made it a favorable place to conduct businesses for all the locals as well as for the foreign investors. It is expected that by the year 2030 Indonesia will have the seventh-largest economy in the whole world. While that is a bold prediction to make, it is understandable why such an occurrence may take place. The current population of Indonesia is a little over 250 million marks. Out of that 250 million people, around 45 million people are in the middle class. And if the world trend is to be believed, the middle class is the one who can improve the economy.

In terms of foreign investors, Indonesia already has a good reputation for allowing foreign direct investments. In recent times, other sectors may open up to foreign investors such as airports, seaports, and even industries such as pharmaceuticals and telecommunications. Despite all that, there are several problems a foreign investor has to face while starting a business in Indonesia. Listed below are some of the most prominent ones.

Regulatory Restrictions: It is not always to conduct of starting a business in Indonesia as foreigner. There are several restrictions imposed by the Central Bank on foreign ownership. This basically forces the foreign investors to rethink their investments, especially if they are a multinational company. Full ownership of the companies are rarely given. There are also restrictions on the kind of products and services a foreign investor or a foreign company is allowed to sell. It essentially means one has to rethink their entire business plan if their intended products or services fall under the restricted list. There is also the issue of the widespread bureaucracy that can be found in Indonesia.

Lack of skilled staff: As explained before, the economy of Indonesia has seen a rapid bloom and there have been a great number of industries and companies being set up almost every year. With so many jobs opening up, all the skilled workers are being locked down by several companies. While there is no shortage of workers in Indonesia, there is a shortage of skilled workers. This basically means that any foreign investor who is looking to set up their business in Indonesia will have to start with relatively younger and less experienced workers unless they want to spend really high to attract the skilled workers. On the other hand, there are certain restrictions when it comes to employing expatriates in certain industries such as oil, gas, and even banking. This becomes a major problem for investors who are eager to invest in the aforementioned industries.

Complex Infrastructure and challenging geography– While the economy of Indonesia may be blooming, working in the country can be very difficult. The entire country is made up of 17000 islands which have been divided into 6 different states. This means, that moving your products from one part of the country to another may become a huge hassle. The logistics nightmare is one of the most complained about aspect of starting a business in Indonesia among all entrepreneurs, both local and foreign. Furthermore, with the nation divided up into so many islands, the infrastructures itself can be lopsided with certain areas having the best facilities while others may be still developing.

Finding the perfect local partner– In Indonesia it is of the most importance that one finds the perfect local partner to do business with. Most foreign investors prefer to engage in joint ventures for various reasons, including tax breaks and speeding up regulatory processes. However, finding the right local partner can be difficult too. While there are many local businessmen and small companies willing to help, they don’t always have the best reputations. Finding somebody with good reputation will allow the foreign investors to make strong connections with suppliers, improve their goodwill among the community and even help get several business permits faster than the average processing time.

Slow process: There are several business permits one has to take when starting a business in Indonesia. In fact, there may be additional permits one may have to take if a foreign investor is involved. While the process of obtaining the said license or permit is straight forward, it is the time that it takes to be issued. The processing time can be very long and it may stop the entire business operations for a long time. The key, in this case, is to be as patient as possible because at the end of the day without such permits the business will not be able to operate properly.

How to start a business